BackTrack is a monthly magazine, published by Pendragon Publishing, concentrating on researched articles and photographic features about British and Irish railway history. It is available through newsagents in the UK and by subscription from the publisher, but does not rely on advertising income and therefore does not publish an ABC circulation figure.

The magazine was founded in 1986 by Nigel Trevena, of Atlantic Transport Publishers (based in Truro, Cornwall), for the purpose of "recording Britain's railway history" (strapline until mid-1993). The editorial in the 'introductory issue' promised that each issue would contain "at least one article on each or the 'Big Four' companies ... (or their respective BR region)", would have "a branch line article in every issue" and would ignore current developments and the preservation scene. The magazine generally adheres to these principles even today, and it claims to be the leading (general purpose) railway historical magazine in Britain (current strapline).

Trevena was forced to retire from active participation in 1989 for health reasons and handed the editorship to David Jenkinson, who had then recently retired from his job at the National Railway Museum to concentrate on writing. In turn, Jenkinson's health lead him, at the end of 1994, to hand on the post of editor to Michael Blakemore, the present incumbent. David Jenkinson and Michael Blakemore's company Pendragon Publishing (office located in Easingwold, N. Yorks) bought the rights to the magazine from Atlantic in 2003.

The contents include picture features of two to five pages, usually in colour, and articles which may be described as amateur-scholarly, with sources footnoted, accompanied by colour or black-and-white illustrations and maps or diagrams as appropriate. A small section at the back contains "Reader's forum" (letters) and book reviews. Advertising is kept to a minimum (usually inside-front-cover and inside-back-cover only). No subjects more recent than ten years before publication are entertained, although contemporary developments affecting historic subjects are mentioned when necessary and current approaches to railway history are occasionally analyzed.

Sort by:
Best sellers Relevance Name, A to Z Name, Z to A Price, low to high Price, high to low
Showing 1-1 of 1 item(s) 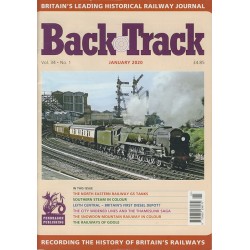